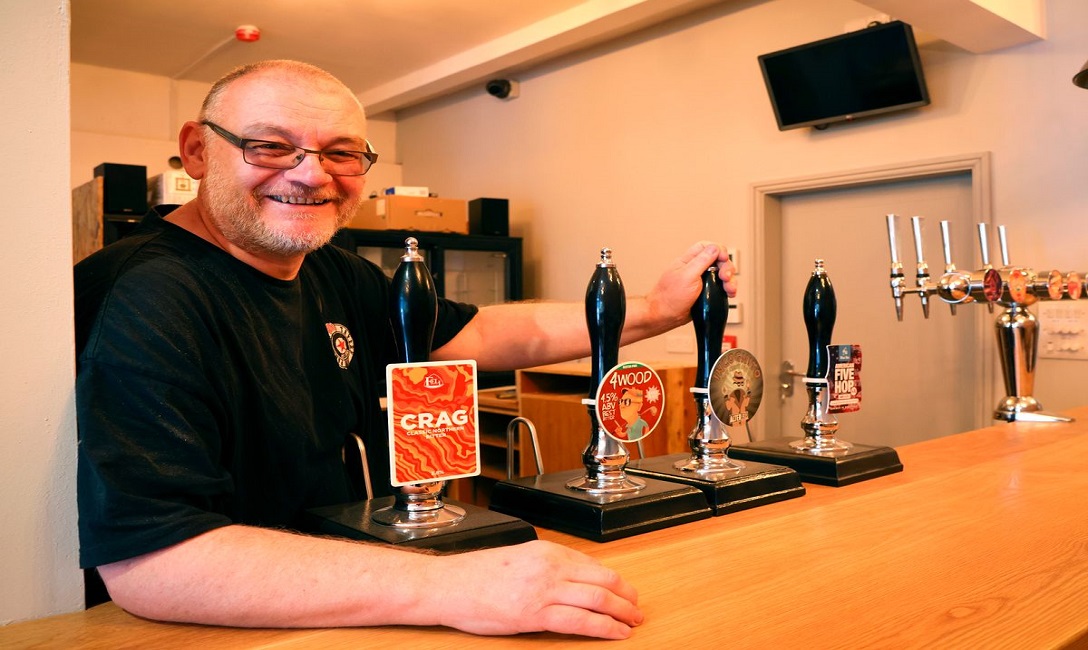 A Nottingham micropub which opened less than a year ago has scooped a top award from CAMRA. The Partizan Tavern, winner of Nottingham CAMRA branch Cider Pub of the Year in March, has now taken the regional crown.

The micropub is situated in Manvers Street, Sneinton, and sells draught and bottled cider. Real ciders (fermented from the whole juice of fresh-pressed apples or pears) have recently included Nouveau from the Sneinton Cider Company, West Croft Dry from Somerset and Torkard's Dab Con One, made in Hucknall. Cask and craft beers are also served, but no spirits.

The Partizan Tavern was opened by Tony Perkins (pictured above) after he was made redundant. He lost his job as an electrician just before the first lockdown in 2020. He spent his spare time planning to open the Partizan Tavern, named after the Serbian football team, Partizan Belgrade, which Tony has followed ever since the side played Notts County's youth team in 1990. The tavern beat seven other pubs, all winners of their respective branches, to take the regional title. It will now go through to the 'Super Regional' round of the competition.

Tony said: "It came as a real surprise to win the East Midlands' award as we are such a small venue. We try to give our drinkers a reasonable choice whether its cider/perry, cask or craft beer."

CAMRA hailed it a "great achievement" for a small pub that's not been open for long. Nottingham CAMRA cider officer Heather Stretton said: “We are lucky to have so many good cider pubs in our branch area, and we are delighted to congratulate the team at the Partizan Tavern on this great success and wish them well in the next round.”

The win comes as CAMRA has launched Nottingham's Cider Saunter, with 26 pubs taking part in the trail throughout July (ends 31st), from the Abdication in Daybrook to the Willowbrook in Gedling. Drinkers have to visit eight pubs to qualify for a free pint at the Robin Hood Beer & Cider Festival in October. Those visiting all 26pubs will be entered into a prize draw to win a free one-hour pleasure flight around the Nottingham area in a light aircraft.

Heather added: "CAMRA is not exclusively about beer, many members prefer to drink apple or pear-based products, and the Nottingham Cider Team is proud to promote these wonderful drinks."

"We try to give our drinkers a reasonable choice whether its cider/perry, cask or craft beer"

Tony Perkins, The Partizan Tavern
Article reproduced with thanks to NottinghamshireLive