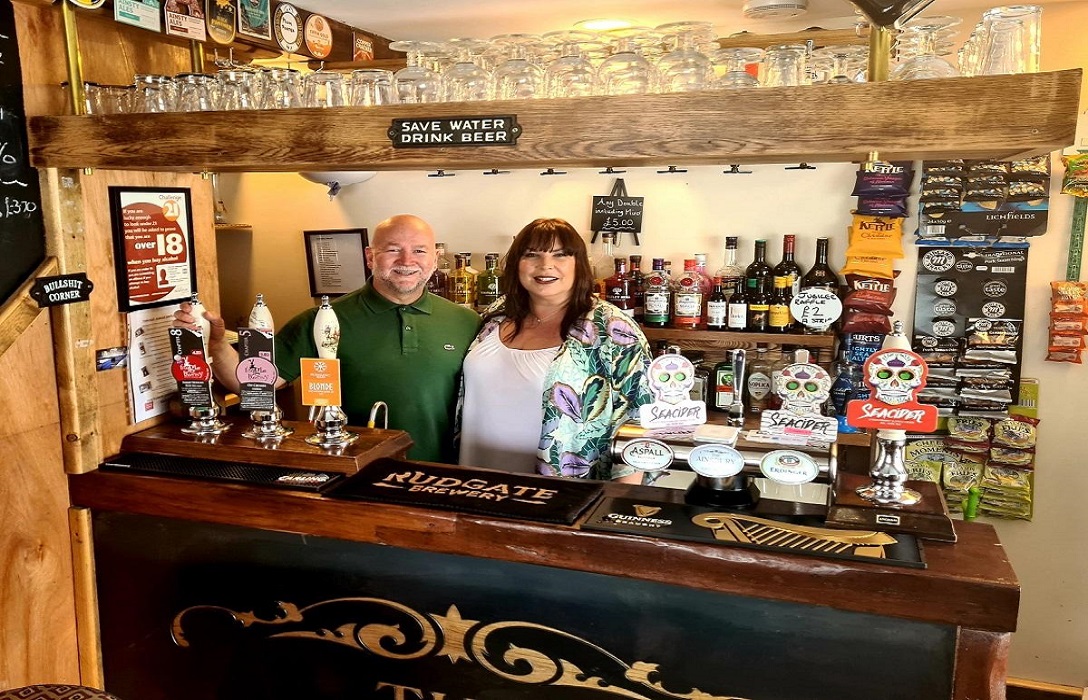 About to retire, John and Nicky Higgins were hoping to fulfil their dream of opening a micropub close to their home in Thackley, when the ideal place came on the market.

“Nicky rang me at work and told me, ”said John. “She had already set up a meeting and had already decided to buy it - she knew I would be on board. It was perfect timing.”

John retired from his job as a detective with West Yorkshire Police on October 31 last year. “We bought the pub on November 1 and opened it on November 3 - it was like it was meant to be.”

The Ainsbury, named after picturesque Ainsbury Avenue adjacent to the Thackley Road property - needed no work. “It’s very traditional inside, with stone floors downstairs and lots of wood,” says John.

Adds Nicky, a former teacher who previously ran a nail technician business, “Everything was new and really nicely done. Downstairs is great to socialise and chat, upstairs is quieter -it’s cosy, with subtle lighting.”

Dating back to the late 19th century, the stone-built corner terrace was originally a general store. In the early1960s it became a house, later falling into disrepair.

“We walked past it with our dog on numerous occasions,” says John.

In 2019 the property was brought back to life by the Townend family, who renovated it, turning it into a micropub.

Then Covid struck and the pub closed in March 2020, not reopening until July 2021. “The downstairs is so small that to social distance would have been impossible,” says Nicky.

She and John were given invaluable help and advice by the Townend’s before taking over. “Colin, Christine, Gareth and Michelle were brilliant in showing us the ropes.”

The pub attracts many real ale enthusiasts out to sample different brews from across the region. “We rotate three casks, have three hand pulls and we rotate the beers on those,” says John. “Some weeks we rotate six beers.”

They source ales mainly from local breweries including Ilkley Brewery, Bingley’s Goose Eye and Copper Dragon in Keighley. “We want to be a local pub that runs local beers,” says John.

Adds Nicky, who enjoys researching beers to stock, “We also try to find beer lines that other places do not have. We don’t get many days off but when we do we go on fact-finding missions, visiting craft ale pubs in places like Bedale and Skipton.”

The Ainsbury also has a selection of more than 20 gins and other spirits, good quality wines and ciders. Free bar snacks on Fridays and Saturdays include home-made Cornish pasty or pork pie, and Sunday brings dripping and potted beef on fresh bread. “We do a ‘Yorkshire Tapas - crisps, peanuts, pretzels, and pork scratchings,” says John.

The pub’s location close to Buck Wood and the Leeds and Liverpool Canal, attracts walkers, many with dogs. “We are dog-friendly and there are always treats for dogs,” says Nicky.

John and Nicky say they have ‘never worked so hard,’ but “love every minute of it.”

Says Nicky: “It is fabulous. We have met so many lovely people, from the local area and further afield.” Adds John: “We are both very sociable so it’s the perfect vocation for us - people are really happy when they come in, and we love that.”

The Ainsbury is located at 7 Thackley Road, Bradford, West Yorkshire BD10 0RS. The pub is open Wednesday to Sunday from 3pm. Friday and Saturday to 11pm, Wednesday, Thursday, and Sunday to 9pm.

“We want to be a local pub that runs local beers"

John Higgins, The Ainsbury
Feature reproduced with thanks to Bradford Telegraph & Argus